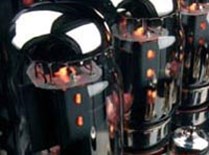 To obtain the most linear behavior for minimum distortion and at the same time set the desired gain, preamp tubes are almost always biased into class A by means of a cathode resistor. Output tubes are usually biased to some form of enriched class AB in order to save tube life and enhance efficiency.

The Current Situation and Challenges

Generally, there are two ways of output tube biasing:

"Cathode biasing" which requires putting a big resistor in the cathode line and using the voltage drop over this resistor as the bias to set the tube at its desired operating point. This method consumes a lot of power and is very inefficient. Further, in order to preserve the output stage gain, the cathode resistor has to be bypassed using a large electrolytic capacitor, without which much of the output signal would be eaten. Unfortunately, a big electrolytic capacitor now sits in the signal path, which can have negative sonic effects. Granted, this method is rather "safe" in that it automatically compensates for tube aging (no "runaways" or blowups and ensuing shop time), however it's clearly far from an optimal biasing method.

"Fixed biasing" is where a pre-set (usually adjustable) bias voltage is applied to the grid of each individual output tube, on top of which the audio signal rides. This appears promising, but unfortunately all tubes, even the same type from the same manufacturer, require a different bias voltage. Further, THAT VOLTAGE LEVEL CHANGES with tube age, actual audio signal level, anode voltage, and myriad other factors such as internal structure stability, grid temperature, materials and tolerances. Therefore, every tube needs to be biased individually. Additionally, the bias setting should be readjusted constantly to keep it within the optimum range, and just as important, to keep it within the safe range. Thermal runaway (and the damage it causes) is prevented only by an internal fuse that some manufacturers fail to provide. For you, that means a trip to the shop for a simple tube failure.

As for power tubes, they're never very linear (except in the case of some exotic triodes) and even the audio signal can influence the tube characteristics so wildly that the bias has to be adjusted continuously.

Considering the technological advantages we live with today, we found it surprising that these issues had never been addressed properly, and that no one had come up with an adequate solution. Until now.

At PrimaLuna, we knew that in order to take the hassle out of tube biasing, make tube equipment more user-friendly and raise the level of performance, we had to come up with a radical solution.
First, it had to be absolutely reliable and it had to be kind to the tubes. Then it had to be "set 'n forget"; factory adjusted for a lifetime. Finally, it had to be 100% sonically transparent; no intrusion in the delicate audio signal would be acceptable.

How We Did It

Throughout our amplifiers there are several "pickup points" that constantly monitor the temperature, voltage and audio signal of the individual tubes. That data is fed to an active circuitry that determines the correct bias for each one, adapting instantly and continuously to the demand for power and all the other changing variables. This means the tubes always perform where they are most comfortable and effective, giving the lowest possible distortion and highest signal integrity. The system does not use time intervals or "sampling" so there are no gaps between adjustments. It's an ongoing, seamless process.

Shown below is the Adaptive AutoBias board installed in a PrimaLuna ProLogue One. 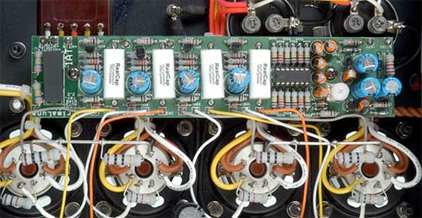 This type of system also accounts for tube aging and eliminates the problems caused by differences between tubes. Finally, tube start-up is softened; internal tube currents are controlled; and potentially damaging peak currents are eliminated.

Just as important, the system is inherently transparent sonically because it contains no extra active or passive parts in the signal path, other than the usual coupling capacitors and grid resistors. Further, steering signals are kept 5 octaves below the audible region. So here we have a system that takes care of power tube biasing in a radically new fashion: continuously adaptive to the audio signal and power demand, while efficiently accounting for a host of other variables.

How It Works In PrimaLuna Amplifiers

The audible advantages of the Adaptive AutoBias were far greater than we had anticipated. We foresaw a slight improvement in power efficiency and distortion levels, but the gains exceeded our expectations. Transparency over the entire frequency spectrum improved significantly, even in the bass region where qualities such as power, authority and control surpassed what we heard in amplifiers of much greater power. The amplifier sounds quicker and more responsive but with unexpected power reserves far beyond its rating.

Best of all: The musicality of the amp with Adaptive Autobias is far superior to prior versions without this innovative circuit.